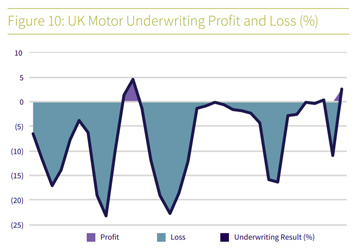 The Association of British Insurers has released its State of the Market 2019 publication, within which it takes a look into the motor market – the analysis of which is below:

Towards the end of 2018, the Civil Liability Act (2018) gained Royal Assent. Although the personal injury reforms within it do not come into effect until 2020 and the revised discount rate may not apply until August 2019, the effects are already being felt by customers. The industry has promised that any cost savings for insurers as a result of the Act will be passed on to consumers.

The signs are that this is already happening – after reaching a peak of £496 in the final quarter of 2017, motor premiums fell £24 through the first three quarters of 2018. This would not be the first time that insurers have passed on savings, with average premiums falling by £50 following the introduction of the Legal Aid, Sentence and Punishment of Offenders (LASPO) Act in 2012, with some suggesting the Civil Liability Act could have an impact of around £35 per policyholder.

Overall, this Act is expected to bring about hundreds of millions of pounds in savings, as well as significantly smoothing the claims process for claimants.

While insurers have been reporting a slowly decreasing volume of personal injury claims since 2016, fewer injuries have also been seen in the Compensation Recovery Unit (CRU) figures, which report on the volume of cases for which the Department for Work and Pensions (DWP) and NHS have been able to reclaim costs from insurers. However, while there has been a drop in 2016, looking further back, the number of injuries reported to CRU has increased 41% since 2005 despite a 35% fall in the number of accidents. At the same time, while the implementation of LASPO (the last set of reforms targeting personal injury claims) in 2012 helped bring personal injury costs down slightly, personal injury lawyers have continued to receive 47p on top of each £1 paid out in compensation to injured claimants. The levels of personal injury and high levels of costs for insurers, and ultimately consumers, provided the backdrop to the Civil Liability Act.

One of the key aims of the Civil Liability Act is to simplify the claims process for victims – directing small claims through an online portal, with a fixed tariff applied to whiplash claims. Currently, making a personal injury claim can be daunting, with many claimants led through the process by Claims Management Companies and solicitors. Following the implementation of the Act, and the launch of the online portal, claims under £5,000 will be directed through this process, with claimants able to navigate and manage the claim themselves, with a fixed pay-out for whiplash injuries. For more complicated, expensive claims, claimants will continue to be able to recover any necessary legal costs, while the claim is dealt with outside of the portal.

The Act has also tackled the calculation of the Ogden Discount Rate, to ensure that claimants receive 100% compensation for their injuries, while ensuring that the rate is fair and reflective of real behaviour. The announcement in February 2017 that the Discount Rate was to be revised set in motion a series of significant adjustments on insurers’ accounts, contributing to a £909 million motor underwriting loss in 2016. As news spread that the method was to be adjusted, better in line with investors’ actual behaviour, this balanced out somewhat, with a £269 million profit in 2017. Nevertheless, this profit still made up just 2% of Gross Written Premiums for the year and was only the third time the industry had made an underwriting profit since 1994.

With profitability a challenge, insurers are continuing to contend with high claim costs, driven up primarily by vehicle repairs. Increasingly sophisticated technology used in cars, while reducing the absolute volume of claims, pushes up the cost of repairing and replacing damaged parts. This has been exacerbated by a weakening pound pushing up the costs of importing the necessary parts to repair cars. Insurers are now paying out over £12 million a day on repair costs alone, on top of the £9 million for bodily injury claims.

Technology has also taken its toll on the volume of thefts, with thieves targeting sophisticated cars with keyless fobs, intercepting the signal between the key and the car. While still only making up a small proportion of claim costs, the amount spent on theft of vehicles has more than doubled from a low of £42 million in 2013 Q3, to £88 million in 2018 Q3. With these more expensive cars being stolen, the average claim for a stolen car reached over £8,000 in the second quarter of 2018, up £3,500 from 2013 when records began. Police records also continue to show an increase in vehicle related theft, with no indications that this trend will slow anytime soon.

Unusually, fire claims became forefront of motor insurers’ minds in the new year of 2018, as fire took over the Liverpool Echo Arena Car Park. Affecting over 1,000 vehicles, the costs at the time were estimated to be over £20 million. Insurers were quick to react, offering emergency assistance and settling the majority of claims in just a couple of weeks.

Overall, 2017 and 2018 have been expensive years, with the average claim reaching a record high at the end of 2017 of £3,095. Despite strong growth to almost £16 million Gross Written Premium, fierce competition in the market continues, with no signs of let up any time soon. With costs at such high levels, and significant public pressure to cut premiums, it is unlikely there will be much relief for insurers on the horizon.

Click the link to see ABI’s full “The state of the market 2019” report.