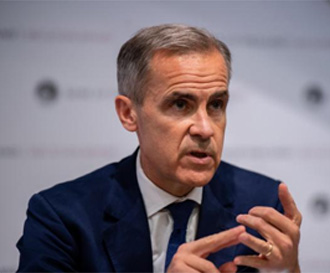 The Bank of England’s governor, Mark Carney, has told the Treasury Select Committee, that a cliff-edge withdrawal would see the economy shrink by 5.5% rather than the 8% slump previously predicted in November, meaning a no-deal Brexit is now “less severe” thanks to preparations made since the end of last year.

His comments come as the cross-party committee of MPs published the Bank’s updated analysis of the impact of different Brexit scenarios, following its controversial report in November last year.

In a letter to the committee, Mr Carney said preparations for a no-deal Brexit since then have meant the potential blow to the economy would be “less severe”.

But he told MPs that extra time could help ensure the impact is reduced further still.

He said: “The preparations that have been put in place since November not just at border in terms of border infrastructure, but also initiatives such as the temporary permissions, the improvements on the derivatives market that we’ve negotiated with the EU… the impact of that has been to reduce the worst case scenario.”

He added: “There’s more preparation that can be done, both in terms of public preparation and preparation by businesses. It stands to reason that if there were more time, more would be accomplished.”

Mr Carney also said the economy was already close to stagnating given the impact of Brexit uncertainty on businesses in the UK.

He said: “If you look through the underlying trend, our judgment is that the economy is growing very weakly, positive but very close to zero.”

The economy contracted by 0.2% in the second quarter and recent gloomy data has raised fears of a further contraction in the third quarter – which would see the UK enter a technical recession.

Mr Carney also said the impact on food prices of a no-deal Brexit would be lower than the Bank previously thought, following the tariff schedule laid out by the Government earlier this year.

The Bank had previously said tariffs would add 5% to food prices, while a weaker pound could add another 5%, adding up to 10%.

It now thinks most of the increase would come from the pound’s fall, meaning that food prices would likely be 5% to 6% higher.

On whether he would extend his term again should Brexit be delayed, Mr Carney refused to give a direct answer.

Mr Carney, who is due to leave on January 31, reminded the committee that he has extended his term twice already.

He said: “It’s a decision for the Government in terms of appointing a successor and the timing of that.

“I have every confidence they will be able to do so. It’s the job of the Bank to fulfil its functions whatever parliament decides and we will do that.”

Picture: Mark Carney, governor of the Bank of England